Pests are considered resistant to a certain chemical compound (natural or synthetic compounds) when it is no longer killed or adversely affected by the chemical. Most pesticides target biological systems in order to control pest populations – “control” meaning: to reduce pest populations to levels that do not cause great plant – or economical loss.

Pesticides can affect the nervous systems of insects, killing them directly or affect reproduction, such as decreasing the amount of offspring each generation. Pesticides can also be general, affecting a wide variety of insects, or target-specific, affecting a specific insect (aphids) or an insect suborder (Sternorrhyncha: Aphids, scale bugs and whiteflies).

Pesticide resistance is due to a beneficial mutation. The mutation usually occurs in the biochemical site (of a protein) affected by the pesticide, after which it is then unrecognisable by the active ingredient in the pesticide (and the pesticide cannot bind to protein any more). Resistance can also be due to an increase of detox systems in the insect cell or chemical pumps that pump the pesticide out of the insect cell. These resistance mechanisms are inherited by the offspring of resistant parents. The evolutionary process behind the survival of the beneficial mutation each successive generation is known as natural selection, the Darwinian mechanism of survival of the fittest. 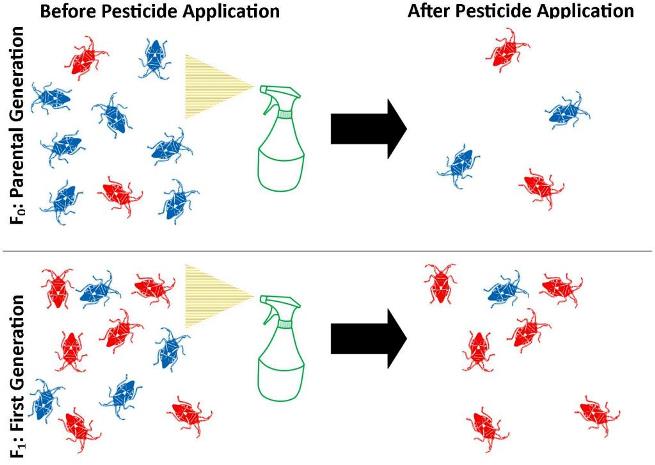 Pesticide resistance can remain in insect populations after the product has been discontinued for as much as 2 years. After which the resistant mutation will decrease slowly. After a few years pesticide susceptible insects will dominate the population once more. Resistant insects have a reproductive deficit in an environment with no pesticides, they produce less offspring than susceptible insects and subsequently decrease in the population.

The prevention of pesticide resistance is to use pesticides correctly:

✓ Use pesticides according to the manufacturer’s instructions (not more and not less). This goes for both the concentration at which the pesticide is made and the frequency of use. This prevents resistance and reduces the impact on the environment.

✓ Changing the Class of pesticide (such as chlorinated hydrocarbons, cyclodienes, organophosphates, carbamates, pyrethroids, neonicotinoids) every season will prevent resistance to a single type of pesticide. Mixed, combination or multiple class pesticides will result in multiple-pesticide resistant insects.

✓ Specific pesticides (such as those just for aphids) will reduce the chance of poisoning other beneficial insects or the induction of resistance in non-target insects.
✓ Make up enough pesticide for your present application. If you are left with some remaining pesticide-solution, pour it into a plastic bag, tie off and throw into the dustbin – this prevents any pesticides going into the water supply. Wash out pesticide equipment with soap (dish-washing liquid is fine); this will help break down any residual pesticides in the water.

Preferable pest management systems include the use of pest predators, crop rotations and preventing pests from attacking stressed plants (good soil, regular water = healthy and resilient plants) in the first place – AKA Integrated Pest Management: IPM. Planting pest and disease resistant cultivars also go a long way in preventing pest populations form reaching epic proportions in the garden. If a plant does not grow well in your garden or is a weak specimen it is better to remove it than face a constant battle with it harbouring pests (one of the reasons I don’t really like sacrificial companion plants).

I don’t advocate against the use of pesticides, but I don’t judge those who do use them either. In rural communities, the use pesticides on crops is the only way for them to sustain themselves and feed their families. So instead of telling everybody not to use pesticides, I supply information on safe and effective use. However, I prefer natural remedies to pesticides. For some environmentally safe and home-based pest control recipes, check out Pest Control.