Radishes stats/requirements at a glance

Radishes are commonly used raw in salads, but I am not too fond of their raw peppery nature. To remove their bite; roast or bake them for a sweet, juicy and crisp root vegetable. Due to their blank taste, you can serve them any way you like with various spices or in soups and stews as part of a whole meal. Considering that they are relatively expensive to buy and nearly fool-proof to grow; one must always have some in the garden. They are small and can be grown as a catch crop or sown in strange awkward places and therefore no additional space is required to grow radishes, simply fill the spaces between existing vegetables.

The radish has a somewhat obscure history; its precise origin and wild state are unknown and currently debated. Some records point to the Mediterranean, but with the discovery of wild forms in India, central China and central Asia, it suggests its evolution in southeastern Asia. It has been cultivated by the Egyptians (7000 BC) mostly for its seed oil (48% of the seed). Later it made its way to China (500 BC) and Japan (700 BC) where larger varieties are grown. Radishes are one of the first crops introduced by the Europeans to the Americas.

Radishes are grown for their swollen tap roots and four main groups are recognized:

Radishes come in many different shapes, sizes and varieties. Most radishes can be grown year round in SA, but there are some exclusive summer and winter varieties as well. Radishes are easily raised from seed and germinate quickly within 3-4 days as is common with most cabbage crops. Summer varieties (Raphanus sativus, Reticulata group) can be grown in pots or shallow soil as they are small and the roots grow close to the surface. They thrive in hot sunny weather with good watering to keep them cropping. For a constant supply; sow at two-weekly intervals.

Radishes are ready for pulling in 3-5 weeks making them the one of the fastest crops in the garden. Make sure not to leave them longer in the ground than what is necessary else they go woody, hollow and lose their flavour. Summer cultivars include the French breakfast, long white icicle, scarlet globe and cherry-belle. All are small globular, red roots, except for the icicle (which has a fierce bite

Winter radishes (Raphanus sativus, Longipinnatus group), such as the Daikon, need deep fertile soil (which was manured for the previous crop). The root can store well over winter without becoming hollow, but can be planted year round. Due to their size, they will take longer to mature. Winter cultivars include Black Spanish, China rose and Daikon.

Some dappled shade can be provided to radishes that wilt in extreme heat. Hill up ground or mulch around the base of the root once it starts protruding out of the ground to prevent the strong sun from wrinkling its shoulders (a similar phenomenon in beets and carrots known as ‘green shoulders’, thus all root veg require their shoulders to be covered).

Aphids and other small pests may be a problem when the radishes become stressed, but generally they are trouble free and don’t spend enough time in the ground for pests to accumulate. Else you can use one of my environmentally friendly pest controls recipes.

Radishes pull easily from the ground once they are about the size of a golf ball for the small globed varieties. You can store them in a jug of water in the fridge for 2-3 days, but they are best used fresh. 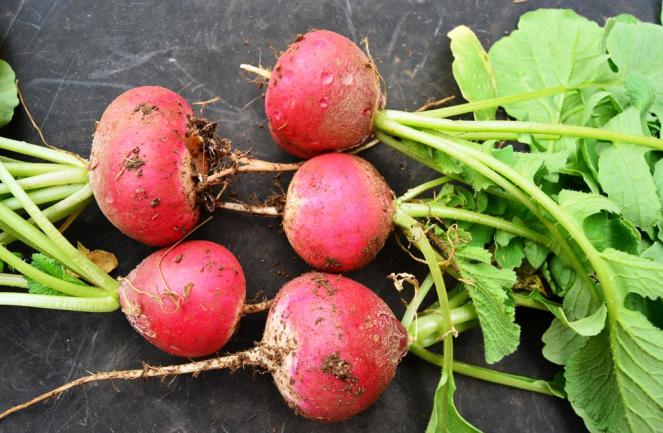 Radishes have perfect flowers that are white, pink or purple. They are self-incompatible and require cross-pollination by insects. They are able to cross with other brassica species, except with cabbages and Brassica oleracea (Kohl-rabi) crops.

Once the pods are dry you can collect them and rub them to release the seeds. If soil borne disease is a problem you can hold the seeds at 50oC (122oF) for 15 minutes. The seeds are viable for 5 years when stored in a marked glass jar. Radish seeds germinate in a wide range of temperatures, 7-32oC (45-90oC) at a minimum of 4oC (40oF) and are therefore suitable for both winter and summer germination.

7 thoughts on “Radish: How to Grow – Vegetable of the Month”